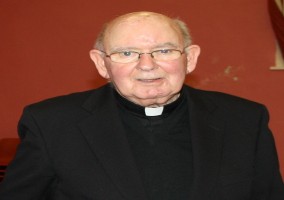 Ordained: 20th June, 1954 in All Hallows College, Dublin for the Archdiocese of Wellington, New Zealand

Fr Curran received his primary education in Presentation Brothers, Letterkenny and his Secondary Education in St Eunan’s College, Letterkenny. He studied for the Priesthood at All Hallows College, Dublin.

Fr. Curran’s Remains will repose at the St. Eunan’s Cathedral, Letterkenny from 5pm

May his soul rest in the peace of Christ.