Homily for Legion of Mary Pilgrimage 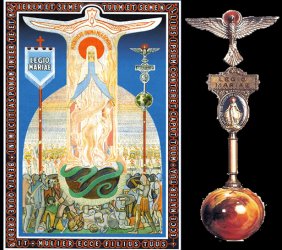 Legion of Mary Pilgrimage to Knock 2022

When you read the writings of Frank Duff and particularly the Handbook of the Legion of Mary you are left in no doubt that Mary is at the heart of everything, because she is like the heart of the Mystical Body of Christ. As the Handbook reminds you: “The Church is the Mystical Body of Christ and his fullness. (Eph. 1:22-23) Christ is its head, its chief, indispensable, and perfect part, from which all the other members of the body derive their powers, their very life.” (Ch. 9)

The Mystical Body grounds the conviction that everyone is a beloved child of the one father; we are all brothers and sisters, members of one Body. That is all very well except that our fallen human nature intervenes with fear and defensiveness in regard to ‘the other’. The person who is different or poor or weak comes to represent a threat an inconvenience, best kept at arm’s length.

Speaking with all the authority given him by God the Prophet Amos railed against indifference for other people:

“Woe to those ensconced so snugly in Zion
and to those who feel so safe on the mountain of Samaria,
Lying on ivory beds
and sprawling on their divans,
they dine on lambs from the flock,
… they invent new instruments of music like David,
they drink wine by the bowlful.”

Those wealthy Israelites in Zion and Samaria knew how to party, sprawled on divans and drinking wine by the bowlful! The problem was not that they partied; it was that they kept all the good things for themselves and cared nothing for their brothers and sisters who were poor.

Lest we think that this is just an old testament preoccupation Jesus takes up the same theme. He tells a story of a rich man, who doesn’t even get named; it is simply made clear that he is a selfish rich man;  he too was probably ‘sprawling on his divan’, eating his fill and drinking ‘wine by the bowlful’ while a poor man, respectfully named Lazarus, is lying at his gate, covered with sores, starving with hunger, dying. Lazarus dies and, in due course, the rich man.

Then the whole truth is revealed. Lazarus is seen in all his beauty, cherished in the bosom of Abraham. The emptiness of the life of the selfish rich man is unmasked. Even though he now sees his own misery in Hades he still thinks that he is superior to Lazarus; ‘Pity me’, he says to Abraham, ‘and send Lazarus to dip his finger in water and cool my tongue,’ as if Lazarus was still his slave.

These are powerful images from the Prophet Amos and especially from the Lord Jesus calling on us to wake up from the selfish sleep that was the rich man’s life and recognize that everyone is a brother or sister. The scriptures are always meant to speak to our own lives. In some very real ways we are the rich man and Lazarus is lying at our gates. It takes no imagination for us to see Lazarus on the global scale in the millions of migrants around our world fleeing war and famine, in the women who are being trafficked and used in the sex trade in our Irish cities and towns today. On a more local level as we head into winter in midst of an energy crisis Lazarus will struggle to keep warm and feed his – or her – children in many Irish homes.

It was a source of pride and satisfaction for Frank Duff to be able to say in the Legion Handbook: “The visitation of a hospital for the poor was the first work the Legion ever undertook and for a while it did no other. It teemed with blessings for the infant organisation, and the Legion desires that this work will ever be attended to by its praesidia.” (Ch. 37) From the very beginning the Legion was driven by a love for the poor, by a desire to head out to meet and care for Lazarus at the gate. It is in the very DNA of the organisation and we need to thank God that it goes on to this very day in Ireland and throughout the world. At times love for the poor goes on in more vivid and radical ways. The Handbook speaks, in the language of the time, of: ‘Work for the most wretched and dejected of the population’

‘This’ it says, ‘will involve the visitation of their haunts; and of lodging-houses, hostels and jails; and it may be, the conducting of hostels staffed by legionaries, resident and outdoor.’ All of those things, visiting and caring for the poor in their own places and in dedicated shelters are going on to this very day.

You can hear the passion of Frank Duff in the following line from the Handbook: ‘…. No searcher after the rare and precious things of the earth must pursue his heart’s desire more earnestly than the legionary pressing after these unfortunates of the world.’

The haunts of the poor and dejected in the Dublin of the 1920s were very rough, unsanitary and unsavoury places. Last year I read Miracles on Tap, the story of the early days of the Legion in Dublin. It’s an awesome story of the courage of young legionaries visiting brothels and facing down the plague of the sex trade in Dublin city centre, relying only on the grace of God and the intercession of Our Lady. I know many of you will have read it but if not I recommend it.

Legionaries have a vocation to stretch themselves and to reach out to the other who is in need knowing that the most serious hunger and the deepest longing is the need for the love of God.

A very specific way in which we as the Church are called to be the Mystical Body of Christ today is in the Synodal Process.  Pope Francis has called for a Synod of Bishops to take place next year and consultations have gone on in every diocese leading to Synthesis documents from every country. We in Ireland have committed ourselves to a Synodal Pathway in the coming years.

The word Synod means ‘walking together on the road’. It is vitally important at this moment in the history of the world. We live in a very divided world. In many countries democracies are under threat and being replaced by strong-man dictatorships. People readily divide into opposing camps and hear only the media that suits their own agenda. The language of public discourse becomes coarse and cruel and demeaning of others. The challenge of Pope Francis to the Church is; will we simply mirror the culture? Will we become polarised, demonising those who are different, demonising each other?

The Legion of Mary answer has to be: No. We are the Mystical Body of Christ. We will seek to walk together, listening to what the Holy Spirit is saying to the Church in our time. I know that some people have been reluctant to be involved fearing that the Synodal process is a path towards changing the Church’s teaching. Pope Francis is quoted in the book Let us Dream saying: “What is under discussion at Synodal gatherings are not traditional truths of Christian doctrine. The Synod is concerned mainly with how teaching can be lived and applied in the changing contexts of our time…”

It goes without saying that there are divisions of opinion among Catholics even about Church teaching. Where there is division there will be tension which is often unpleasant. However, the invitation and the challenge to us who believe that the Church is the Mystical Body of Christ is the following: If we walk together, if we speak the truth in love to one another and if we listen with love to others who think differently to us, then the Charity of God, the Holy Spirit will be among us and there will be change. Ultimately it is not the teaching of the Church that will be changed. It is we who will be changed. We will become more fully the Mystical Body of Christ.

We live in interesting and challenging times for the world and for the Church. When there are challenges and disagreements in life there are two temptations into which we can fall. One is to become aggressive and confrontational; the other temptation is to turn away and disengage.

Neither of those temptations is admissible in the Mystical Body; neither is acceptable in the Legion of Mary. The call of the Legionary when there is an awkward situation in which the offer of the Gospel is not welcome is to be patient, persistent always trusting that the work is being guided not ultimately by us but by the Holy Spirit.

And so, on this day when members of the Legion of Mary are gathered in Knock from far and wide and we are joined online by brothers and sisters all over the world let us give thanks to God for the great vocation of service of all the Lay Faithful and especially in the Legion of Mary. I call you to rededicate yourselves to the love of the poor and least of our brothers and sisters, to Lazarus who is at our gate. I invite you most sincerely to commit yourselves to the Synodal pathway of the coming years. By your patient, generous presence in the process you will allow Mary to be at the heart of the Church. Let me leave you with these words of the Handbook:

To appreciate what form of service ought to characterise legionaries in the life of the Mystical Body we look to Our Lady. She has been described as its very heart. Her role, like that of the heart in the human body is to send the blood of Christ coursing through the veins and arteries of the Mystical Body, bringing life and growth with it. It is above all a work of love. Legionaries then, as they carry out their apostolate in union with Mary are called to be one with her in her vital role as the heart of the Mystical Body.